Differences Between Scooters, Motorcycles and Mopeds

Are you planning on buying a new two-wheeler? Is it going to be a scooter, motorcycle or a moped? The difference between the three is quite clear though people tend to confuse the matter.

One is bigger than the other two, while another is more powerful and usually easier to ride. The difference between a scooter, motorcycle, and moped is an ongoing debate. Riders often argue about which one is the best, which is why you’ve maybe heard different answers and theories.

Continue reading to find out what’s the difference between these three vehicles. We’ll also discuss their similarities and help you figure out which is the best for you.

What is a Motorcycle?

They date back to the early 1900s and have always been super-popular. A motorcycle is a two-wheeled vehicle with a powerful motor and no pedals.

These are meant for high speeds and come with better acceleration characteristics. They handle high speeds better than most other two-wheelers. 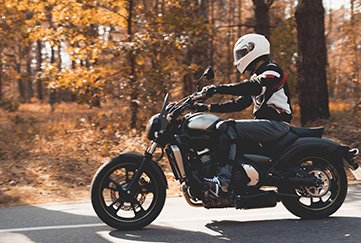 In most cases, motorcycles also have some cargo storage space available.

Most models have 250cc engines, which is why they’re larger than the other two vehicles. The engine is located in the middle of the frame while the gas tank is right above it. It’s attached to the frame, so you sit astride it while the tank is in front of you.

The way you mount the motorcycle is also quite different than how you’d mount a scooter for example. You cannot simply step through the chassis but have to swing a leg over it. Plus, the wheels are much larger than the wheels of a scooter.

Due to their size and power, motorcycles are much more popular than scooters and mopeds. Still, they’re also more expensive and require more maintenance. Some people consider them more challenging to ride as well, but that depends on your skill and experience.

What is a Scooter?

Scooters are another popular option that might be a bit more suitable for commuting. These two-wheelers have a step-through chassis and a platform for your feet.

These showed up in the early 1900s and have been quite popular ever since. Have you heard of Vespa? It’s among the most popular brands developed in Italy after World War II. Since then, the Vespa has been exported everywhere around the world. 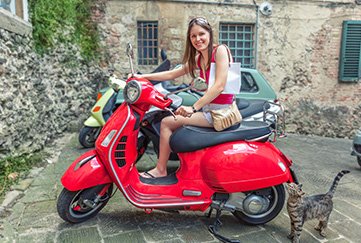 Scooters have a small engine providing propulsion and displacement from 50cc to 250cc. In most cases, they feature small 10-inch wheels and have an electrical charging system. This system powers the ignition system and the lights.

These have a combination of manual and automatic transmissions. The automatic, otherwise known as CTV, is usually the more popular one because it’s easier to use than the manual one. Either way, scooters are lightweight, fuel-efficient, and easier to ride than motorcycles. They’re also a bit more suitable for daily commutes than mopeds.

You have to be at least fourteen years old to ride a scooter. In some countries, the minimum age of sixteen is required. Riders are required to have insurance and adequate riding gear. You also need to complete a test at the Department of Motor Vehicles to learn the laws in your state.

This type of vehicle is more maneuverable than a motorcycle because of its low speed.

What is a Moped?

People often confuse mopeds and scooters, more so since they aren’t as popular in the United States. You’ll hear riders claim that the two vehicles are the same, or that size is the only difference.

A moped is more like a bicycle-type vehicle that has pedals and a low-powered engine. As a result, it’s an economical way of commuting and transporting.

The term moped comes from the terms motor and pedal. 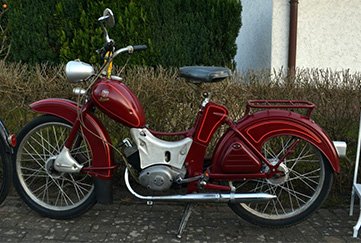 It’s because you need to use bicycle-like pedals to propel a moped, helping to start its motor. The engine here is usually as smaller than 50cc, so its maximums peed doesn’t go above 28mph.

Because it’s so slow, you can’t ride it on highways. You probably won’t be able to keep up with the ongoing traffic which would definitely put you and others in danger. On another note, they’re ideal for city commuting and cruising.

The sometimes have a basic electrical system though you can ride them by solely using the pedals. The engine is meant only to assist you as you pedal.

In some states, these vehicles are defined by engine size while in others they’re defined by the maximum speed.

When it comes to legal classifications, each state has a different requirement. The rules vary depending on the safety equipment, type of license, insurance, and so on.

Almost every state requires you to have a license while a person has to be at least fifteen or sixteen years old. Some states require you to have insurance, while others don’t. Similarly, in some states, you have to register a moped to be able to take it to the road.

At this point, you maybe already noticed some of the main differences between the three types. While scooters and mopeds are smaller than motorcycles, there are another few things to note.

You need to have a license to ride a motorcycle while you might not need one to ride a moped. In most cases, rules are quite similar regardless of the vehicles, but they do vary depending on the state you live in.

Top Speeds: How Fast Do They Go?

In most cases, mopeds don’t usually go above 28mph to 30mph. Modern scooters, on the other hand, can go as fast as 85mph.

Being the largest and most powerful, motorcycles can reach up to 206mph to 249mph, which is the record set by the Kawasaki Ninja H2R (track-only).

A more realistic limit is around 188mph for use on the road.

Which Types Have Automatics and Manuals?

Most motorcycles have a manual clutch, meaning you have to shift gears manually. Scooters, on the other hand, have automatic CVT transmission known as twist and go.

Scooters are probably the most fuel-efficient though mopeds aren’t much different. Motorcycles, since they’re the biggest and most powerful of the three, also require the most fuel. They spend more, but they’re also the fastest.

Read more about how to carry extra fuel.

The price varies from brand to brand, so make sure to check more options before you opt for one. Naturally, motorcycles are the most expensive of the three. Scooters come next, while mopeds are the most affordable.

Keep in mind that modern scooters cost much more than older models that can be found at quite affordable prices.

Insuring a motorcycle will cost you more money than if you’d want to insure a moped or a scooter. It’s because they are larger and more powerful than the other two types.

Note that scooters are more expensive to insure than mopeds regardless of the model and its manufacturing date.

For even more info, read about motorcycle insurance compared to car insurance.

Interestingly, all three types have quite some storage space to offer. Motorcycles are upgradeable, meaning you can attach plenty of different bags for additional storage.

All three types of vehicles allow you to store some stuff under the seat.

Motorcycles have the largest engines usually ranging from 150cc to 2,000cc. Scooters usually come with engines ranging from 50cc to 250cc depending on whether it’s a more modern model or an old one.

Scooters are probably the most convenient though it all depends on your needs and preferences. These two-wheelers are fuel-efficient and can go faster than mopeds.

However, motorcycles are the fastest which might work better for you if you’re often on the highway. Mopeds could also be a quite convenient option for short-distance commuting.

Which is the safest?

People often think that motorcycles aren’t safe because they can go as fast. However, it all depends on the rider and whether or not the person is rides responsibly.

Mopeds are the slowest of the three, and still, can be quite dangerous if not used properly. For this reason, make sure always to wear protective equipment and obey the laws and rules on the road.

Which is the easiest to ride?

Still, some modern scooters can be quite tricky to learn how to ride. These tend to be heavy and not as easy to maneuver with.

What is a motorbike?

In most cases, a motorbike is the same as motorcycle. Some countries use one term over the other, but they’re usually the same.

Is a moped considered a motor vehicle?

A moped is considered a motor vehicle if it requires registration in your country. Check if you need a license for riding one, and if so, your state probably considers it a motor vehicle.

Now you probably understand why some people struggle to tell the difference between the three vehicles. Though motorcycles stand out more than the other two, mopeds and scooters are sometimes tricky to tell apart.

You should always consider your needs and preferences before you opt for one of these. Also, don’t forget to use a helmet, protective eyewear and maybe even a motorcycle jacket whenever you ride.

Check the laws and regulations in your country when it comes to these three.