Are you interested in riding a dirt bike? It’s fun and exciting, so it’s ideal if you’re looking for adventure and excitement.

It’s equally as fun as it looks, but there’s more to riding it than just that. It’s not hard, but it takes some practice which you shouldn’t pass on.

Do you already have a dirt bike, or you’re looking to buy one? Either way, you should first learn some basics about riding it. Take a moment to read the article below to discover valuable information on how to ride a dirt bike.

Safety should always be your first concern. Technically, you can use any helmet you like as long as it’s certified as safe by the Department of Transportation.

It’s up to you to choose between full-face helmets, open-face, and modular, depending on your preference. Think about getting gloves, a leather jacket, some pads, and boots.

How to Grip Your Handlebars

A firm grip is critical in riding a dirt bike, so make sure to do this step properly. On the right side of the bike, you have brakes, which you should locate when you grab the handlebar.

There’s a lever in front of the right handlebar that controls the front tire brake. The back brake is somewhere near the front one.

You should grab the handlebars firmly because you’ll probably ride across a rougher path. Unless you hold it tight, you can lose control over your bike, which could be disastrous.

However, try not to hold the handlebars with stiff arms and hands. Hold tightly, but try not to be stiff too much because that will hurt your body after a while.

As we said, there’s more to riding a dirt bike than simply hopping on it and riding towards the sunset.

You should check your positioning when you first sit on the bike. If the vehicle fits you, your feet should be able to touch the ground just a little.

Focus on where you are on the seat because most beginners sit way too far back. If so, move forward a bit. The seat should have an indentation where the gas tank and the seat meet. This is where you want to sit.

The best way to test this is by standing up on the bike. Put both feet on the pegs and stand up without pulling on the handlebars. You can only do this if you’re sitting correctly. If not, you’ll probably want to pull on the handlebars.

Proper rider position is critical though you can sometimes ride in a more relaxed way if the road isn’t too bumpy and rough. You should always stand up on your footpegs when you’re riding on an aggressive trail.

Lifting your butt off the seat will help your legs and body to act as shock absorbents. Bouncing along the trail while you sit is bad for your back and can sometimes even cause back and spine injuries.

When you stand up, straighten your back, stick out your elbows, bend your knees slightly and push your head forward.

It isn’t the most comfortable position, but it works for when the road is bumpy. You’ll find it far more comfortable as you gain more experience, especially if you ride quite often. 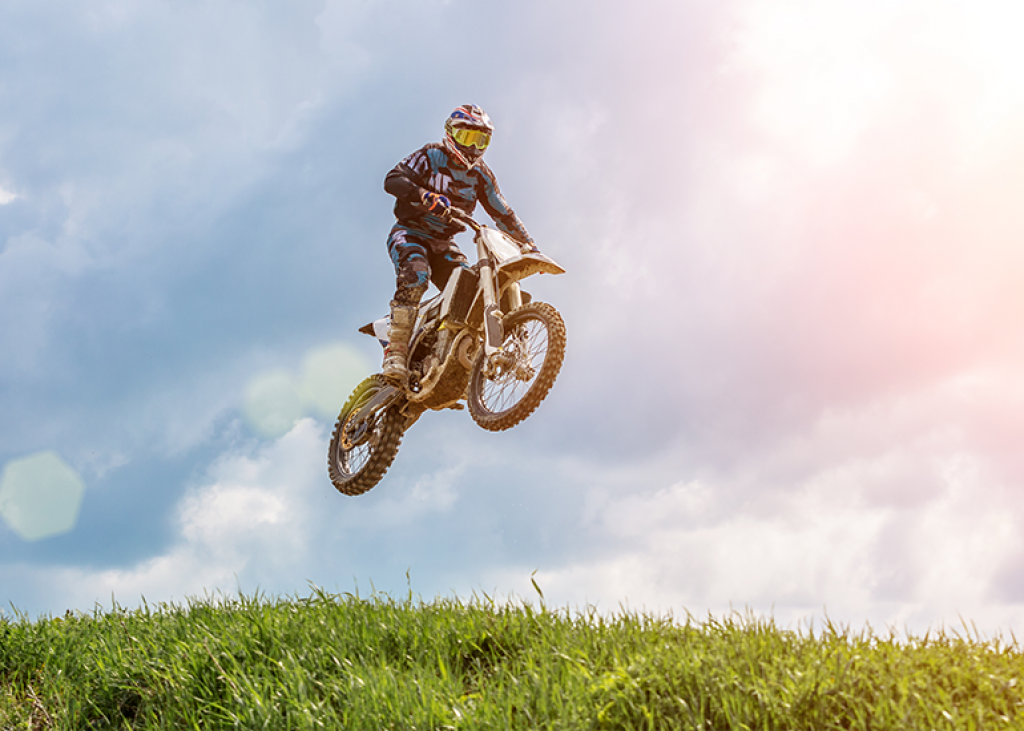 Even if you opt for a full-face helmet, you should make sure that you have a wide field of vision. You must be able to see everything in front and around you so that you can prepare your body and bike for the road ahead.

As we mentioned, riding a dirt bike isn’t the same as riding a regular motorcycle or scooter. It’s much more physically demanding, so you must know how to do it.

While you can ride in a casual body position, it’s not something you can do all the time. In other words, you should change your position on the bike as you move across the trail. This is more difficult to do if the path is bumpy and rough than if it’s smooth.

You should always stand when you approach a bump or a hole. It’s safer to cross the obstacle this way than if you’re casually sitting. The reason is that your legs work as suspension, absorbing shock and impact when riding over holes and bumps.

This gets easier with time and practice, but it’s fundamental because it’s also protecting your back.

In some cases, it’s not a switch or a button but a key slot. If so, turn the key to the on position, which should activate all the lights.

Decide if you need the choke, depending on if you’re starting cold or not. If it’s warm outside and you were already riding that day, then you won’t need it. But, you’ll have to pull out the choke if it’s cold outside.

Probably the most important thing you should understand is how the throttle and gear shifting work. In most cases, the only way to change gears is by using the shifter that’s in front of your left footpeg.

Sadly, there’s no way to know what gear you’re in, so that’s something you need to get a feel for.

There are five gears, but stepping down on the shifter will put you in first gear. Hooking your toe under the shifter and raising it by a half click will put you in neutral. This might be a bit tricky for you to find because it’s not a full click, but you’ll get the hang of it with time.

The shifter goes from first, to neutral, and then to second, third, fourth, and fifth. There’s no clutch on kids’ bikes, and those usually have only three gears.

Letting the clutch too fast without any gas would kill the engine. However, too much gas would shoot you forward once the throttle is disengaged.

If you want to shift up while moving, you should keep the throttle at the exact position. Make sure not to move it as you shift, but don’t let go either. Pull in the clutch and use your left foot to reach under the gear shifter, pulling it to the next gear.

This time, you can release the clutch rather quickly and not as slowly as before. The entire thing isn’t as complicated as it may sound to you right now. It takes some time and practice to get a grasp of how it works.

Rough terrain almost always wiggles and wobbles the bike. That’s perfectly normal when it comes to bumpy tracks, more so when you ride slowly. Keep in mind that it’s quite tricky to control a slow bike on a bumpy road than a fast one.

If you’re a beginner, you’ll probably feel that much more wobbling because you won’t go as fast. At higher speeds, the bike doesn’t wobble as much as it does when you ride slowly.

When it comes to acceleration, it’s essential to be patient. Natural forces will try to push you backward, which is another reason to make sure you’re sitting properly.

Sitting properly helps you accelerate because you can counter the rearward forces more easily. It’s only easy to do if you’re not sitting too far bag.

Your bike has two brakes. In most cases, beginners prefer the right-hand brake, which is the silver lever in front of your right hand. For this reason, it’s usually advised that you don’t touch it at all for the first few rides.

Unless you have a good feel of it, it can send you flying over the handlebars regardless of how fast you were moving. For this reason, you shouldn’t be as rough on it as you are on a bicycle.

The best brake to use is the back one. It’s the foot brake controlling the rear tire, which produces a smoother stop. You can find it in front of your right foot peg.

You should always go with someone on your first ride. It’s because you’re a beginner, and these rides can sometimes be quite risky for inexperienced people.

The dirt track you ride on has a lot to do with the entire experience. Bumpy roads are the most fun, but they’re also quite dangerous and tricky to master.

For this reason, you might want to start on a smoother track the first time you go out for a ride. You can gradually proceed to rougher tracks as you gain more experience.

Hopping on a powerful bike might seem fun and cool, but there’s more to consider than that.

In other words, those bikes are trickier to control, and you’ll probably struggle more than you would with something less powerful. You should gain some experience first before you get a powerful machine.

Sadly, dirt bikes can’t be used legally in many areas. For this reason, you should check if it’s legal to ride in the area you’re interested in.

The reasons are many, and riding where it’s illegal to do so will get you in trouble.

Get to Know the Choke

It’s usually on the left side, near your leg peg. It serves to chokes air into the engine, increasing the gas flow. As we said, you should use it during cold days.

Leaning the bike isn’t as simple as it seems, which is why it takes quite a bit of practice. Always lean the bike in the direction of the turn and keep your weight on the outside peg.

You should always familiarize yourself with the bike before you get going. Sit and get to know where all the controls are and whether or not something is wrong.

Locate the brakes and other controls before you start the engine. You must know how the controls work before you take your first ride.

The best way to learn is by taking classes from someone experienced and certified. This way, you’ll learn about body positioning, controls, and much more.

For more info, check our women’s beginners guide to riding.

Which gear should I start in?

Experienced riders can start while in gear, but beginners should do so when the bike is in neutral. It’s much easier if you don’t have as much experience.

How do I turn on by dirt bike?

Lean the bike in the direction of the turn and put your inside leg down. Keel most of your weight on the outside peg as you’re turning.

At this point, you probably have a good idea of how to ride a dirt bike. Still, we suggest you take proper classes to learn how to maneuver this type of vehicle.

Of course, riding is pretty simple, but it takes some practice before you can say that. For beginners, many things seem complicated and tricky to do, especially if they don’t have any experience whatsoever.

Another thing to note is the importance of safety equipment. Make sure to choose the right helmet for this type of activity as well as gloves, boots, jacket, and possibly even some pads.